It's been a spectacular week of sport at the ECCO FEI European Championships in Herning, Denmark and there is huge anticipation ahead of tomorrow's Blue Hors Dressage Freestyle Final which will bring the event to an exciting conclusion.

After yesterday's dramatic and emotional Grand Prix Special, in which all of the leading contenders made inexplicable errors of course before British Olympic double-gold medallist Charlotte Dujardin and Valegro eventually won through for gold, it seems we must expect more of the unexpected. Even the greatest proponents of this equestrian discipline which has been enjoying such an explosive level of popularity in recent years showed themselves capable of human error, just like everyone else. 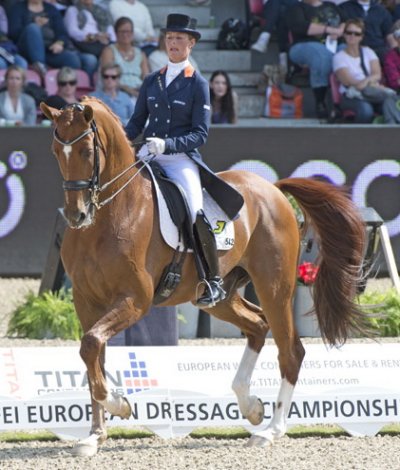 Tomorrow of course the Freestyle allows far greater freedom of expression. As Cornelissen joked yesterday "you can't make mistakes in Freestyle" to the same extent because there is no set formula for the test, although certain specific movements are obligatory. Dujardin, and her trainer and fellow Olympic team gold medallist Carl Hester who will compete with Uthopia, have both confirmed that they will re-use the magical musical scores that accompanied them throughout their performances at London 2012. Dujardin will therefore be a tough nut to crack, because not only is the quality of her work with Valegro breath-taking in itself, the patriotic musical accompaniment adds even more weight and stirs the emotions.

Her greatest rivals are likely to be Langehanenberg, who will be last into the arena, and Cornelissen who will be first to go as the final tranche of five riders take their turn.

The German rider's last-to-go starting spot is always helpful, and her stallion Damon Hill has been in the form of his life this season, but while their technical excellence is never in doubt, their creativity and expression must be at its theatrical best if they are to overtake all those who have gone before them.

For Cornelissen and Jerich Parzival their very presence at these Championships is already a triumph, and no matter what happens tomorrow afternoon they can return to The Netherlands with great pride. The horse's ability to bounce back following surgery for a heart condition is phenomenal in itself, and testament to the extraordinary care and attention he has received, and to the power of the bond that connects him to his devoted rider. They already have Team silver along with Individual Grand Prix Special bronze in their grasp.

Edward Gal's Glock's Undercover is also within the final five into the arena tomorrow, along with Germany's Kristina Sprehe and Desperados FRH who have shown so much promise and growing maturity over the past week.

All eyes will be on Dujardin however, who has already placed herself in yet another page of the history books be becoming the first-ever British rider to win Individual gold at the FEI European Championships when topping yesterday's Grand Prix Special.