There's been a theatrical touch to just about every moment of the ECCO FEI European Championships 2013 in Herning, Denmark this week, but nothing could surpass the pure drama of today's Blue Hors FEI European Dressage Grand Prix Special won by Olympic champions Charlotte Dujardin and Valegro from Great Britain. The pressure was at boiling point, with all sorts of questions about which one of the top riders would reign supreme. But no-one could have expected the litany of errors that plagued all of the eventual medal-winners, and which left the spectators in a state of near-disbelief.

Germany's Helen Langehanenberg and Damon Hill claimed silver, while defending champions Adelinde Cornelissen and Jerich Parzival took bronze for The Netherlands. It was particularly emotional for the Dutch rider whose brave horse has battled back from ill health to take his place amongst the greats once again this summer. And despite all the drama it was a day of wonderful sport filled with good humour and great horsemanship. 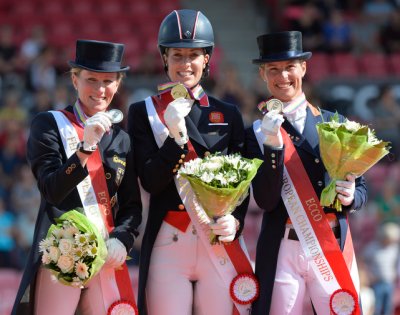 The drama began in earnest with a mistake from Patrik Kittel who forgot his two-tempi changes during the rapid-fire Grand Prix Special test. The experienced Swede, who took Freestyle bronze at the last European Championships on home turf in Rotterdam, The Netherlands two years ago, had saddled up the gelding, Toy Story, at the last possible moment when his 2011 medal winning ride Watermill Scandic was slightly injured while warming-up at the Danish fixture last Monday. And the 13-year-old gelding was giving an excellent account of himself today until things suddenly went awry.

Kittel said afterwards, "I had such a good feeling with Toy, everything was good, perhaps a bit tired but a good feeling. When I heard the bell ring my mind flashed back to Aachen this summer where he slightly injured his lip and we were disqualified. I got totally blank and thought, oh no, not here, not now, I nearly panicked! But when I realised I had just ridden the wrong programme I went back on automatic, although the mistake probably cost me my Freestyle spot". As it happened, he was right, and he didn't make the cut into Sunday's Top-15 Freestyle, missing out by two places when finishing in 17th place.

He was followed by Germany's Isabell Werth who also didn't get the score she was hoping for. "I took too much risk before the transition into piaffe" she explained after posting 71.890 with Don Johnson. "It was just a misunderstanding. Too bad but no tragedy. He's only 11 and did great things in there" added the veteran who was a member of yesterday's gold-medal-winning German team. It was fellow-countrywoman, Kristina Sprehe, who raised the game to another level with a mark of 79.345 with the super-handsome stallion Desperados FRH. And there was a bustle of excitement when London 2012 Olympic team gold medallist, Carl Hester from Great Britain, followed her into the ring with Uthopia.

A big score seemed to be on the agenda here after the wonderful opening trot extension that earned 9.2, but once again the horse lost concentration after struggling in piaffe and when 78.497 went up on the board this partnership's medal hopes were dashed. "The standards are so high that you must take risks. Uthopia was brave today and his extended trots were phenomenal. I'm very happy" said the man whose risk-taking so often pays off, but who had to settle for sixth place in the final analysis today.

It was when the final group of six riders got underway that things began to get a little surreal. The battle was now expected to be played out between reigning Reem Acra FEI World Cup™ Dressage champion Helen Langehanenberg riding Damon Hill NRW for Germany, Olympic double-gold-medallist Charlotte Dujardin with Valegro for Great Britain, defending Grand Prix Special and Freestyle European champion Adelinde Cornelissen with Jerich Parzival for The Netherlands and her Dutch colleague Edward Gal who was the star of the 2009 European Championships fixture at Windsor in London with the super-stallion Totilas, but was today partnering the up-and-coming Glock's Undercover.

Langehanenberg was second to go of the final group and was looking good until, towards the very end of the test when she should have been en route to A for her march up the centre line, she veered across the diagonal instead, only to be halted by the judge's bell. She punched the air in frustration before re-grouping and getting back on line. "That was the worst thing that could happen and I am really angry at myself about it" she said in the immediate aftermath. It should not have happened, but I am only human. On the other hand I am very proud of Dami who did a great job!" He did indeed, because the pair still went into a strong lead with a score of 84.330.

Next in were Dujardin and Valegro whose record-breaking performance in yesterday's Team competition has only further enhanced their already legendary status. And they were producing their trademark fabulous trot extensions before the rider unwittingly began two-tempi changes where she should have started canter half-pass. It was the spectators who alerted the judging team by their gasps as Ground Jury President, Isabel Judet, said afterwards. The crowd had hardly recovered from the surprise of Langehanenberg's mistake when Dujardin followed suit.

The rider looked stunned at first, but then quickly pulled herself together and still managed to nail more stunning piaffe before making her final halt. There was an air of amazement and confusion before a score of 85.499 went up on the board to put her into the lead.

Denmark's Nathalie zu Sayn-Wittgenstein and Digby posted 73.353 before Cornelissen and Jerich Parzival took their turn. Perhaps in the light of the mistakes made by their main rivals the defending individual double-champions could pull something really special out of the bag. But when the Dutch duo made precisely the same error as their British counterparts their score of 81.548 would only be good enough for bronze medal position. The crowd by this stage were almost dumbstuck by the way the competition had unfolded. Gal and Glock's Undercover finished just outside a medal position when earning a mark of 79.479, but all the buzz was about the bizarre series of mistakes.

As Cornelissen pointed out, she made a similar error but still managed to win the 2011 title in Rotterdam. She joked this afternoon that when she saw what happened to the others "I thought, to be sporting, I would do the same!"

All three ladies managed to see the funny side of it. Langehanenberg said "I've made mistakes before - but not that one!" while Dujardin explained "when I was coming down to the warm-up I met Patrick Kittel and I asked him how did it go, and he said "I went wrong!" and I said "Oh no!". Then I heard that Helen had gone wrong too, and I went "Oh no!" I wasn't thinking of that at all when I went into the arena, but coming into the corner I went into canter and I thought "Oh god!" I looked across and I saw Andrew (Andrew Gardner, judge at B). Then it was quite difficult to pull myself together, there was so much noise. There was much more to do so I knew I had to get into it again, and that there was no room for error. I knew I was in trouble with Carl (Carl Hester), but Valegro was great. It was a case of pat the horse, sack the rider!"

Her friend, trainer and mentor Carl Hester was far from annoyed however. He said afterwards that her capacity to put such a big mistake behind her and then produce more fantastic work from Valegro made him very proud.

Dujardin talked about what today's success means to her and how delighted she is that Valegro is still available for her to ride. "After the Olympic Games it was very tough not knowing what was going to happen and I'm so very grateful to still have the horse, he's like my best friend. Two years ago I did my first European Championship and I got to the Individual, but I was a bit lost and not as confident as I am now. To come back and get another gold is amazing" she said.

The challenge presented by the Grand Prix Freestyle test certainly produced some dramatic moments today. FEI Dressage Committee Chairman, Frank Kempermann, commented "it was a good day for the sport" but pointed out with a laugh that while the Olympic Grand Prix Special test was used up until last year "it was the riders who requested to go back to the old Grand Prix Special test, so it's not the Dressage Committee's fault!"

While there was an air of amused jubilation at the post-competition press conference, there was also a very poignant moment when Adelinde Cornelissen was asked what it felt like to have another medal around her neck after the difficult summer she has endured due to her horse's ill-heath. Jerich Parzival underwent an operation to address arrhythmia in June, and his rider, who is deeply devoted to the 16-year-old gelding who has brought joy to so many people, attempted to reply before bursting into tears. The worry and tension of the past few months spilled out, but so did her great affection for her horse.

It was a timely reminder of the depth of the partnerships built between great riders and their great horses. And we will see more of both when the Freestyle brings the Blue Hors FEI European Dressage Championships 2013 to a close on Sunday afternoon.