Michael Jung (GER) was in a class of his own in the Dressage arena at the HSBC FEI European Eventing Championships at Malmö (SWE) today, effortlessly taking the lead on an outstanding mark of 28.8 with his exciting new team ride Halunke FBW. 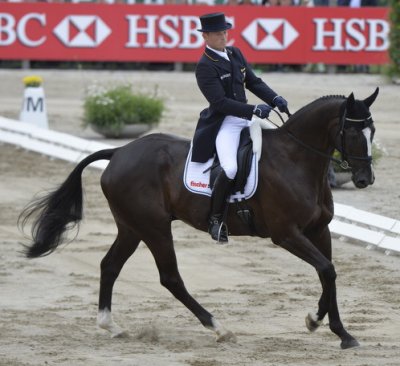 The defending European Champion was awarded a 10 for his riding from Christian Landolt (SUI), the judge at B, and has a significant eight-penalty advantage over second-placed William Fox-Pitt (GBR).
Jung’s thrilling performance also helped the German team maintain their modest advantage over the host nation, Sweden. Great Britain is still in third place, with less than one Cross Country penalty covering the top three teams.
Halunke, a magnificent dark bay by Heraldik, is a superior mover to Jung’s Olympic, World and European Champion La Biosthetique Sam and is remarkably well established for a nine-year-old. In Jung’s sympathetic hands the gelding exuded quality, lightness and correctness in a test that was full of contrast.
“I am very happy,” said a beaming Jung afterwards. “Halunke is not experienced but he is a very good dressage horse with great movement. He’s been very relaxed and he gave me a good feeling. I think the important point to make, though, is that I’ve had the opportunity to concentrate on just one horse during our team training in Luhmühlen, and that has definitely helped.”
Britain’s experienced anchorman William Fox-Pitt scored several eights and a few nines, but paid the penalty for a missed final flying-change in an otherwise beautifully-presented test on the good-looking chestnut stallion Chilli Morning.
“The flying change was annoying because that’s one of his best movements, but he can also be anxious in walk and that went fine,” commented Fox-Pitt.
“Chilli is very handsome and he knows it. He’s quite a challenge because he can be boisterous and yet you need to be gentle with him. You have to humour him. But I very much enjoy riding him.”
There are seven stallions at Malmö, including Lesbos, lying seventh on 40.8 for French anchorman Nicolas Touzaint; and the youngest horse in the field, the seven-year-old Dervish ridden by Viachaslau Poita for Belarus’s first senior championship team.
Swedish supporters had plenty to cheer about with great performances from Ludwig Svennerstal (Shamwari 4), currently in third position on a personal best score of 37.6, and Sara Algotsson-Ostholt, who is equal fifth on her new team ride, the nine-year-old mare Reality 39.
“It’s amazing to be at a home championships,” said Olympic silver medallist Algotsson-Ostholt. “There’s no other place like it in Eventing.”
Good tests and personal bests came thick and fast on this second day of Dressage at Malmö.
Althea Bleekman (NED), the youngest competitor in the field, was overcome with emotion after scoring 53.2 on Ziomf. “It’s at least eight marks better than anything we’ve ever done before,” she said.
The 21-year-old, who is making her debut for her father’s country, the Netherlands, has the benefit of plenty of wise advice from her mother Clissy (nee Strachan), a member of Britain’s European gold medal team in 1977.
British individual Izzy Taylor was thrilled with 42.0 on the little mare KBIS Briarlands Matilda to hold equal ninth place with Niklas Lindback (SWE) and Mister Pooh. And Joseph Murphy gave the Irish team a great boost with a mark of 44.4 on the lovely Cruising-sired Electric Cruise. He is now in equal 14th with Italy’s Vittoria Panizzon on the popular grey mare Borough Pennyz.
Riders’ thoughts are swiftly turning to tomorrow and all are treating Rüdiger Schwarz’s impressive Cross Country course with its many turns and changes of pace with the utmost respect.
The action starts at 10am (CEST) tomorrow and, as today’s leader, Michael Jung anticipates: “The going is perfect and it should be a great day of sport.”
“I think it’s going to be very exciting,” agrees William Fox-Pitt. “You certainly need a horse that is good at following string! It’s far removed from what we’re used to, but that’s part of the fun and the challenge of the sport.”
And when asked whether Michael Jung is beatable, Fox-Pitt replied: “We’re certainly planning to make him work hard for it!”
Individual Results after Dressage
1 Michael Jung/Halunke FBW (GER) 28.6
2 William Fox-Pitt/Chilli Morning (GBR) 36.6
3 Ludwig Svennerstal/Shamwari 4 (SWE) 37.6
4 Ingrid Klimke/FRH Escada JS (GER) 39.4
5 eq Peter Thomsen/Horseware’s Cayenne (GER) 40.6*
5 eq Sara Algotsson-Ostholt/Reality 39 (SWE) 40.6
7 Nicolas Touzaint/Lesbos (FRA) 40.8
8 Tim Lips/Keyflow (NED) 41.0
9 eq Izzy Taylor/KBIS Briarlands Matilda (GBR) 42.0*
9 eq Niklas Lindback/Mister Pooh (SWE), 42.0
*denotes individual rider
Team Result
1 Germany, 112.2
2 Sweden 120.2
3 Great Britain, 125.2
4 France, 134.2
5 Italy, 141.6
6 Ireland 143.4
7 Netherlands, 144.6
8 Belgium, 150.4
9 Switzerland, 150.6
10 Belarus, 187.2
Follow the action with live results here: www.rechenstelle.de/2013/malmo/live/leaderboard01.html & information: http://malmoeventing.com
Photo: Kit Houghton/FEI
Tweet