The Inter Pacific Exchange is held bi-annually and is contested between Australia, New Zealand, Hong Kong, Japan, United States and Canada. Teams participate in a two week tour and compete in a scrambled One Day Event and a Nations Cup Showjumping Event. 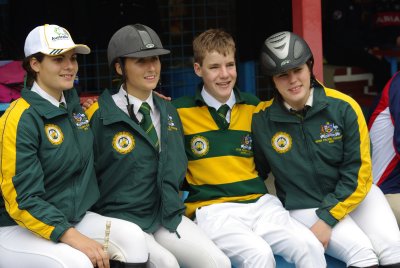 The Inter Pacific Exchange which began in Brisbane on Friday 26th July, concluded with an action packed Nations Cup competition held at Yandina over the weekend of the 10-11th August.

Australia and New Zealand battled it out for first place over three rounds, time was the deciding factor with Australia just a fraction over one second in front of the Kiwis to take out the Nations Cup. USA placed third, Hong Kong fourth and Canada fifth.

Favourite parts of the trip for participants included a trip to Fraser Island and the Green Ropes challenge at the Currumbin Wildlife Sanctuary on the Gold Coast.

Highlights of the program for NSW Pony Club representative Brandon Beneke from The Vines Pony Club included, "meeting and making friends with riders from around the world and representing Australia in an International competition."

Brandon is the current Club Captain of The Vines Pony Club and is a successful rider in a variety of disciplines including polo cross, mounted games and showjumping.

"The Inter Pacific Exchange has been an incredible experience. I hope that the friendships I have made and what I have learnt will bring on more opportunities for me in the future," said Brandon.

Brandon's advice for other Pony Club members hoping to follow in his footsteps? "My advice would be to make the most of all the opportunities that Pony Club offers. Practice, persevere and always do your best."

The Pony Club Association of NSW is supported by Sport and Recreation a division of Communities NSW, Global Entries Online, Mitavite official feed partner, as well as other local sponsors. To find a Pony Club near you visit the state website on www.pcansw.org.au