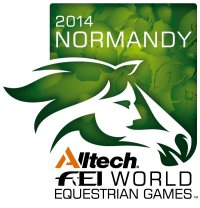 The Eventing CCI ** competition organised as part of the preparatory events for the Alltech FEI World Equestrian Games ™ 2014 in Normandy crowned Italian Vittoria Panizzon on Merlots Magic.
After the dressage (Friday) and Cross (Saturday) events held in the heart of beautiful Le Pin National Stud, the competition ended today with the Jumping event in Caen.

"I'm really thrilled", Panizzon said after the prize giving, "as he's not the best show jumper. I've never been to Haras du Pin before, and it's a fabulous setting and a really beautiful course. I'm sure the Games will be well attended next year. If we can get the same level of support and the same atmosphere as there was in London last year it will be fantastic."

As in Sartilly a few days earlier, over 200 volunteers had been selected to take part in this event. The options selected by the Organising Committee, especially for the cross-country event and the transfer of horses between Le Pin National Stud and Caen, gave way to a real enthusiasm on the part of competitors and their federations. The way is paved for 2014.

"We conclude this second test event with rich lessons for the Organising Committee. Various sporting aspects and our organisation model have been tested, as well as some important structuring technical choices. We remain focused for the Driving competition, which will be held from 23 August to 25 August in the Prairie Racecourse in Caen". Fabien Grobon, Director of the Organizing Committee.

The Organising Committee thanks all the people who contributed to the success of this event.