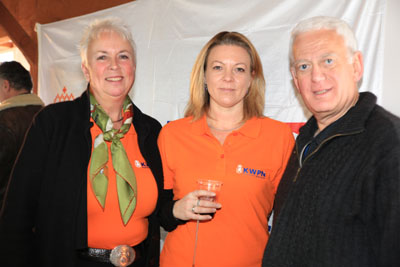 With the horse world becoming smaller and Australia now a respected part of the international performance horse industry, I was delighted to accept an invitation to beautiful Ellanbrae Park, formerly known as Statene Park, which was established by Olympian, Mary Hanna as a breeding and training centre.

Statene Park has enjoyed an enviable reputation for producing top horses, top riders and playing an important role in the early days of the Australian performance horse industry.  The stallions Kilof McOhl and Valuta stood at stud and Mary Hanna trained many of her best horses from this lovely property.

Saturday the 15th June, 2013 was the occasion of the inaugural Ellenbrae Park Open Day, held to introduce the new owners Carolyn Welsh and David Shavin, who took over in December, 2012 and have some very exciting and ambitious plans for the centre.

The beautifully appointed 100+ hectare property is set in the picturesque Macedon Ranges.  The restoration project has provided a very rewarding challenge for Carolyn and David who have delighted in bringing the facilities back to former glory, while establishing a base for breeding top quality performance horses using the best Dutch bloodlines and a concept that gives KWPN members and friends benefits and international co-operation.

Carolyn said, “Berni, we will have plenty of news for you as our imported mares will soon arrive in Australia and I have been looking forward to introducing Emmy de Jeu to some of the key industry participants in Australia, so that a nucleus of dedicated horse people can join forces to create a really pro-active group who will be instrumental to taking the Australian breeding industry forward, in line with the leading countries in the world.”

I was very interested to hear of the innovative and pro-active plans to further an “Australian/Dutch” association which aims to support Australasian breeders who are keen to be part of this well established stud book and form a co-operative group to work together and create opportunities for friendship, education and commercial ventures – a win/win for all concerned.

Carolyn and David were the perfect hosts and opened the hospitality area of the indoor to talk about the plans for Ellanbrae Park and to introduce Dutch breeder and Board Member of the KWPN in The Netherlands, Emmy de Jeu.  Emmy’s knowledge of horses and her extensive network of industry contacts and friends make her an excellent mentor and friend to Australia.

Zonkara de Jeu and Emma will be arriving at Ellanbrae Park in the coming months, while Zhefony, Ifony and the three yearlings will remain in the Netherlands to grow out and form the basis of this Australian/Netherlands connection.

Carolyn added, “We are very pleased to have purchased the very beautiful Hanoverian weanling filly, Hollands Bend Dancing Queen (De Niro x Hirtenqueen (Imp) (Sunny Boy x Rubinstein) from Jane and Peter Bartram of Hollands Bend.  HB Dancing Queen was assessed as top 10 foal in this year’s Hanoverian assessment tour, so she gives us something special to work with for the future.”

“We have not overlooked that our primary goal is to be involved with ... and to produce, top quality riding horses and we are thrilled that the beautiful and well-performed mare W.Esther de Jeu (Rousseau x Jazz x Ulft) will be arriving in Australia shortly.  She is competing at Prix St George and will be jointly owned by Ellanbrae Park and Emmy de Jeu.  This is a very exciting project and has cemented our strong friendship with Emmy and many of her contacts in The Netherlands.  This mare will be competing in Australia and will also be part of the Ellanbrae breeding program via ET.

Securing a foundation mare of this quality is a fantastic achievement for Australian horse breeding and we are looking forward to sharing the fun and highlights with all Dutch horse enthusiasts.” said Carolyn.

She added, “I will also continue with my beautiful young Australian bred, triple frozen KWPN semen mare, Larapinta Johanna (Johnson x Metall x Concorde).  She will be competing shortly and we hope to breed with her using ET technologies.  Her first date will be with David Shoobridge’s magnificent imported Dutch Grand Prix stallion, 00 Seven.  This stallion was also purchased through Emmy de Jeu.”

Emmy concluded, "It is hoped that the day brings forward people with an interest in Dutch horses - riding, training, breeding, selling, sourcing breeding stock or older proven horses from The Netherlands.  This is my fourth visit to Australia and now that I have some of my horses here, I am hoping to return regularly.  There are some very exciting opportunities and it will be great to be a part of growing the interest.  You already have some good horses here and a number of people who are members of the KWPN, we hope to attract more members and make a special section for KWPN Australia, similar to the popular KWPN stud book in North America."

Follow the links on the bottom of this page ...

You can go to the KWPN membership form ( http://www.kwpn.org/member/public/signup

Story and Pictures This email address is being protected from spambots. You need JavaScript enabled to view it.   0422 381 217