Scott Brash (GBR) has been judged as the winner of the Furusiyya Rider of the Day award at The Dublin Horse Show. 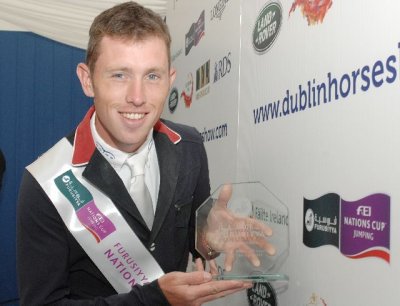 Brash, riding Hello Sanctos, was last to go for Great Britain, but held his nerve under huge pressure and rode two brilliant clear rounds, helping Great Britain win the Furusiyya FEI Nations Cup™ Jumping in Dublin and also qualify for the Finals in Barcelona in September.

The Furusiyya Rider of the Day award is presented to the horse & rider combination that is judged to have best displayed qualities such as harmony, partnership, balance and skill throughout their two rounds; values represented and embodied by Furusiyya. The award was judged by Lt. Col. Gerry Mullins from The Dublin Horse Show.