The reigning Olympic champions from Great Britain snatched the lead in the PSI FEI European Team Jumping Championship in Herning, Denmark today when the French lost their grip on pole position. Lying second overnight, the British produced three fabulous clear rounds over the super-tough track designed by Frank Rothenberger and Bo Bak Andersen that really separated the best from the rest. And when the Swiss were the only other team to produce a hat-trick of fault-free efforts they were promoted from bronze to silver medal spot ahead of tomorrow's last round of the Team competition. 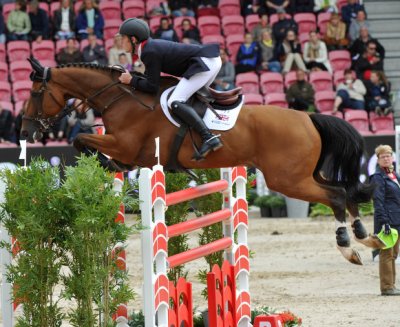 The British advantage is minimal however, with just 0.27 points separating them from their Swiss rivals while the French are 2.69 points further adrift in third. The defending European champions from Germany remain in fourth while the Swedish team has risen from seventh to fifth following brilliant performances from Henrik von Eckermann (Gotha) and defending Individual champion Rolf-Goran Bengtsson (Casall Ask).

It was clear from the outset that the 13-fence course was in a different league to that set for yesterday's opener by the master German course-builder and his Danish counterpart. Many of the riders pointed out this afternoon that yesterday's Speed track had seemed quite modest when they walked it, but that it turned out to be a lot more difficult when they rode it. There was nothing in the least bit modest about today's test however, with big and wide oxers, tall verticals, and numerous difficult questions about judgement of pace and distance from the very start to the finish-line.

The opening vertical was followed by an oxer at fence two, but problems began with consistent mistakes on the approach to the PSI vertical at fence three. Riders were already preparing for a right-handed turn to the oxer at four, located near the in-gate, which was quickly followed, but on a snaking line, by a gate-style upright at fence five.

From there on the pressure increased with every stride, the double of vertical to oxer at fence six seemingly catching many of the earlier combinations off guard, while the ride down to the open water at seven proved a bit of a conundrum. Defending champion Bengtsson explained afterwards that the choice here was six long, or seven holding strides "but it was easy to make a mistake" he said. "The six strides had to be very forward, and if you decided to go for that then you took the risk of not getting high enough over the water", which was how it turned out for quite a few, but not for his brilliant stallion Cassall Ask.

The biggest challenge of all came at the triple combination at fence eight which opened with a massive triple bar. The second element, a very tall oxer, fell time and again when riders couldn't collect their horses again quickly enough, while the one-stride distance to the vertical on the way out also demanded balance and control.

Bengtsson said "it was a case of push (to the triple bar) and hold (for the oxer) and hope the fence stays up, and it was very short going out". And, as if that wasn't enough, it was essential to re-organise on landing as the super-wide oxer at fence nine, mostly ridden off a seven-stride pattern with a check for balance, was unforgiving.

And they were still a long way from home. There were only two real opportunities to save important fractions of seconds in order to make the 87-seconds time-allowed, and the second of these came on the turn down the final line. Horses had sight of the arena gateway and might well have been looking forward to going through it at this stage, but the most competitive riders turned them short to the narrow vertical along the arena perimeter which was followed by two great oxers at 11 and 12, the latter with a water-tray, before turning left down to the final vertical which brought them through the finish.

As the top 10 of the 19 competing nations battled it out there were some brilliant individual performances, and the quality of horsemanship shone through with a particularly brilliant exhibition from the youngest athlete in the Jumping Championships, Jos Verlooy, whose light-footed 10-year-old gelding, Domino, made the formidable track look like a walk in the park. The 17-year-old son of Belgian rider Axel Verlooy trains with The Netherlands' Harrie Smolders and oozes talent. Unsurprisingly, Verlooy Jnr said today "from the first fence my horse felt super. I found the course very smooth to jump and I did not at all feel nervous". A rider for the future for sure.

The Belgian team was lying tenth as the day began, but when the Irish and Spanish slipped they improved to eighth place, and just 0.04 points separating them from Italy in seventh and trailing the sixth-placed Dutch by just 0.27 points so there is little or nothing between these teams. The fifth-placed Swedes go into tomorrow's decider just over a fence off the leading British while Germany added just four faults to their tally today to hold onto fourth spot. Pathfinder Daniel Deusser produced a classic clear from Cornet d'Amour and anchorman Ludger Beerbaum followed suit with Chiara, but both Carsten-Otto Nagel and Corradina, silver medallists at the last two European Championships in Madrid, Spain in 2011 and Windsor, Great Britain in 2009, and Christian Ahlmann with Codex One fell victim to the middle element of the triple combination for four faults each.

The real battle was played out between the French, British and Swiss, the latter really applying the pressure when the only penalty they collected today was the discard single time-fault of Pius Schwizer and Picsou du Chene. Paul Estermann's Irish mare, Castlefield Eclipse, breezed home while Janika Sprunger's Palloubet d'Halong looked every bit the offspring of the legendary Baloubet du Rouet when making almost every fence look like it should be a metre higher. And with anchorman Steve Guerdat's Olympic gold medal winning ride, Nino des Buissonets, simply jumping for fun the Swiss look set to pounce if the British can't hold it together tomorrow. The difference of 0.27 points leaves no room for a whisper of a mistake.

But the Olympic team gold medallists were superb, pathfinder Ben Maher producing yet another stunning performance from Cella. He asked her for some long shots including a big stand-off at the formidable oxer at fence nine, but it seems her answer is always a positive one. Michael Whitaker rode one of the great rounds of his long and successful career with the 11-year-old Viking. The Yorkshire-born rider has many reasons to be in celebratory mood, particularly following his marriage, just last week, to long-time partner Melissa Braybrooke and today put another big smile on his face. It wasn't completely plain sailing for the British quartet however as William Funnell's home-bred 12-year-old stallion, Billy Congo, left three fences on the floor so it was up to Scott Brash to stay clear and pile the pressure on French anchorman Kevin Staut as the day came to a close.

Brash is no shrinking violet however, and with the quality of jumping from Hello Sanctos that helped earn that historic Olympic team gold at Greenwich Park in London last summer he ensured his side had nothing to add to yesterday's scoreline.

French prospects were already threatened by four-fault efforts from opener Patrice Delaveau with Orient Expresss HDC and second-line rider Aymeric de Ponnat and Armitages Boy - yet another victim of the middle element of the triple combination. But when Roger-Yves Bost steadied the ship with a great clear from Castle Forbes Myrtille Paulois they might still finish with just four faults and maintain the lead they established yesterday. Anchorman Staut made it to the open water before making his first mistake with Silvana HDC, and when the final vertical was also dislodged their eight faults ensured that both Deleaveau and de Ponnat's single errors would have to be counted. So they dropped to third as the action drew to a close.

Nothing has changed at the very top of the Individual rankings, with Maher still holding a narrow lead over Switzerland's Steve Guerdat in second and Frenchman, Bost in third. Fourth-placed Bengtsson is followed by Portugal's Luciana Diniz who produced another fantastic round from Winningmood for just a single time fault today while Germany's Daniel Deusser is in sixth ahead of Brash in seventh place. History shows that it is difficult to be in the race for the Individual medals when lying much further down the line as the top-25 carry their penalty points into Saturday's finale, but Spain's Sergio Alvarez Moya (Carlo), Belgium's Ludo Phillippaerts (Challenge V. Begijnakker) and Switzerland's Janika Sprunger (Palloubet d'Halong) may have some ideas about that.

Maher said today - "so far, so good!" but he knows there is still a long way to go before the medals are awarded. "There is always drama as the week goes on at these kind of Championships but I will continue to do my best, Cella is great and I just need to trust her. She's learned so much this summer, she's a dream ride with a lot of attitude - that's what makes her so great!".

Brash's anchor ride was pivotal to the British rise to the top of the team rankings. Asked how he felt under today's pressure he replied "for sure we needed a clear, but when it's like that then you've just got to do what you've got to do". And he did it.

Tomorrow he and his team-mates will need to do it all over again if the the British are to add the PSI FEI European Team Jumping Championship medals to their golden collection. The action resumes at 18.00 tomorrow evening.

Result after Second Competition - First round of Team Final and second Individual - here.