Roger Yves Bost became only the fifth French rider to claim Individual European gold when galloping to victory in the PSI FEI European Jumping Individual Championship final at Herning in Denmark this afternoon.  Great Britain’s Ben Maher went into the final competition with the narrowest of leads, but a fence down in this afternoon’s opening round saw him having to settle for silver ahead of team-mate Scott Brash who rose from overnight tenth place to take bronze when producing the only double-clear performance of the day.
Bost follows in famous footsteps, as the list of previous French champions is an impressive one.  Pierre Durand and the legendary Jappeloup first topped the podium for France at St Gallen, Switzerland in 1987, Eric Navet reigned supreme on home turf at La Baule, France in 1991, Alexandra Ledermann and Rochet M - the first woman ever to take the title - topped the line-up in Hickstead, Great Britain in 1999 and Kevin Staut and Kraque Boom were winners in Windsor, Great Britain in 2009. 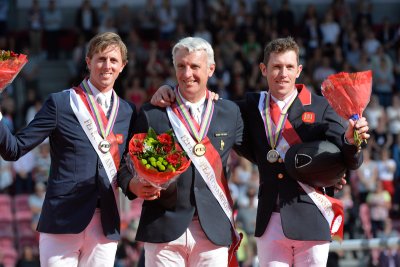