In a thrilling final showdown, the Olympic gold medalllists from Great Britain added the PSI FEI European Team Jumping Championship title to their honours list when pipping the defending champions from Germany in Herning, Denmark tonight. And a gutsy Swedish side battled through to snatch the bronze in a competition that kept spectators on the edges of their seats.

It could hardly have been better scripted, with last-man-in, Britain's Scott Brash, using up all his luck before finally clinching the result. He had one fence in hand going into the arena, and when the first element of the triple combination fell he couldn't even afford a single time penalty if his side was to stay out in front. He joked afterwards that his team-mates had provided him with some leeway by their great performances, "these are fantastic lads to ride with, and they gave me a window of one fence down so I thought I'd make it even more exciting and use it!"

But he managed to leave the rest of the course intact to bring the title back to Britain for the first time in 24 years. 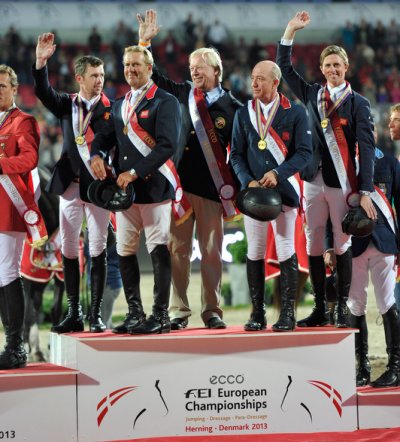 Team-mate, Michael Whitaker, was on that winning side in Rotterdam in 1989 alongside his older brother John, Nick Skelton and the late Joe Turi. "Was it really that long ago?" asked Michael Whitaker when he was reminded of that achievement this evening.

There were 13 clear rounds over Frank Rothenberger's new track, and only the top ten teams went into this final round of the Team competition. There was plenty for them to think about, all the way from the opening triple bar to the final massive oxer. The bending line from the vertical at two to the oxer at three had to be accurately ridden, and the open water at fence four came up very quickly after a left-handed turn. There was little time to adjust for the following vertical at five, and even if they made it clear to there, several horse-and-rider combinations made a mistake at the offset vertical at fence six.

Now it was right-handed to the difficult line that included the oxer at seven and triple combination - vertical, oxer, oxer - at eight. This claimed a large number of victims and had a long two-stride stretch to the third element. The vertical at night and oxer at ten led on to the double of oxer to vertical at 11 before a long gallop across the middle of the arena to the penultimate wall. And then it was down the long side and back towards the ingate over the final oxer.

It was like a wheel of fortune as the competition played itself out, the advantage swinging wildly in one direction and then another. The real battle was fought between the leading five teams, and with three clear rounds each the fifth-placed Swedes and fourth-placed Germans held their ground. Sweden's Jens Fredricsson had a bad day with the normally reliable Lunatic yesterday but he bounced back with a vengeance tonight while those who saw Angelica Augustsson's elimination on Tuesday and yesterday's wilder-than-wild ride with the mare Mic Mac du Tillard could hardly believe their superb improvement for a clear round today. The rider confirmed a change of bit had done the trick, and the difference was more than remarkable. Henrik von Eckermann and Gotha were one of the many victims of the triple combination so it was Rolf-Goran Bengtsson's clear with Casall Ask that kept the Swedish side so competitive.

But it looked at one stage as if Germany, lying fourth overnight, might just clinch it. Carsten-Otto Nagel and Corradina were the only ones to fault as Daniel Deusser (Cornet Amour), Christian Ahlmann (Codex One) and Ludger Beerbaum (Chiara) were all foot-perfect to keep them on their second-day running tally of 12.77.

By now the third-placed French had already fallen by the wayside. Despite clears from Patrice Delaveau (Orient Express HDC) and Roger Yves Bost (Castle Forbes Myrtille Paulois) they were obliged to add the four faults collected by Aymeric de Ponnat and Armitages Boy when anchorman Kevin Staut ran into trouble toward the end of the track with Silvana HDC, lowering both the second element of the double at 11 and the final oxer.

And the second-placed Swiss were out of it too, with single mistakes from Pius Schwizer (Picsou de Chene) at the oxer at seven, for Paul Estermann (Castlefield Eclipse) at the oxer at 10 and for Steve Guerdat whose Olympic ride Nino des Buissonnets put a foot in the water. Janika Sprunger and Palloubet D'Halong were yet again sensational, but their single time fault had to be into account and when they finished with a total of 17.85 the Swiss slotted into fifth behind France in the final analysis.

Hanging in the Balance

It was all hanging in the balance as Scott Brash entered the ring with his Olympic team gold medal winning ride Hello Sanctos. Michael Whitaker was the only member of the British team to fault today when Viking hit the vertical after the water but Will Funnell galloped to the rescue with a clear that more than made up for his three fences down yesterday with Billy Congo. As Funnell said tonight it was just the right time for him to produce his best work - "tomorrow would have been too late, wouldn't it?" he said with a smile. With their nearest rivals slipping down the order, and Maher having set them up with yet another pathfinding clear from Cella, Brash had that fence in hand as he set off on his mission, but he admitted afterwards that he was taken aback when he heard the first element of the triple combination hit the dirt.

"I was surprised when he had it (hit the fence) but looking back on it now, I came down on six strides and was a bit off it. I knew before I started I had to be careful of the time so I wasn't really worried about the clock" he explained. And as he galloped through the finish the crowd roared their approval for the British success.

British Chef d'Equipe, Rob Hoekstra, said afterward, "obviously I'm delighted, it was 60 years since we won Olympic gold last year. We've been making an effort to win a Championship title for a long time, but the Germans have been fantastic at Championship level. Now we want to be as good as them or to overtake them! Congratulations to Sweden for making a great comeback today by the way" he added.

German Chef d'Equipe, Otto Becker, was gracious in defeat. "We could win or be sixth until the end, it was very close, we had to wait to see how it would be. My team really fought and I'm totally happy with silver. Congratulations to the English for this win, they deserved it, and to Sweden too. This was great advertising for showjumping today - everyone enjoyed it!"

Looking back on how things had unfolded, Funnell said " I had two bad rounds and then jumped clear. To be part of a gold medal team is fantastic. I didn't know it had been such a long time since we won the last one and I hope we won't leave it so long the next time!"

Ben Maher admitted he had been unsure about the end result. "I didn't know if we could hang on today because the other teams came back so strong. I was glad to give the team a good start. Scott had us a bit worried having that fence down but he came through when it mattered, he's a great guy to have on our team" Maher said.

With Olympic and now European team gold already ticked off his wish-list, Brash joked tonight that when it comes to medals he's a bit spoiled. "I'm used to gold, so any other colour wouldn't be as good now!"

Maher goes into Saturday's Top-25 Individual Final still at the top of the leaderboard but with only the smallest advantage. Asked what he thought of his chances he replied "European Championships in my eyes are more difficult to win than Olympics because every round counts. But Cella is an unbelievable horse to ride, she has her own style and she's wonderful. There's still a long way to go and a lot of riders close together, but if I have two more clear rounds that will be enough...."